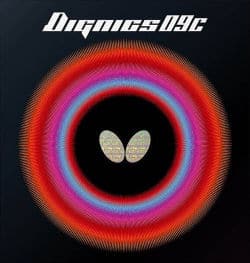 This is a review of the new Butterfly Dignics 09C rubber, released in early 2020. Dignics 05 was released in early 2019, and followed by the release of  Dignics 80 and 64 later on in the year. This review briefly discusses how Dignics differs from the Tenergy series, and how the 09C is different from the others in the Dignics family.

Thanks to David from Butterfly Australia, for the pre-release sample of Dignics 09C, which is reviewed and compared in detail below.

DIGNICS guides your play to a more advanced level.

The essence is the combination of Spring Sponge X, the advanced version of Spring Sponge which has more elasticity; the uniquely composed top sheet, with strengthened abrasion, proves great resistance on the surface, providing the feeling of holding the ball at impact.

This is even more true with the newest addition to the line, Dignics 09C. Compatible friction and a high level bounce is realised thanks to the synergy effect between the original top sheet and a rather hard Spring Sponge X (a little harder than Tenergy 05 Hard), to bring out the features of a friction rubber while upgrading the High Tension effect. The pimples code No. 209 delivers topspin and defensive play with high amount of spin as well as ease of over-the-table techniques and counter topspin. Dignics 09C, with the upgraded friction High Tension features, guides a player who expects the unique feeling of a friction rubber to new heights. Dignics 09C, Overpowering Evolution. 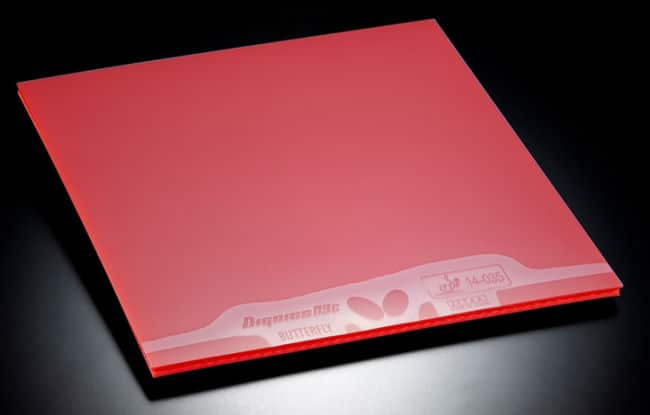 Is it really tacky?

Yes I would class it as tacky, but there are levels of tackiness, and not all tacky rubbers are created equal. I consider it tacky if it can lift a ball up momentarily after you press it onto the rubber, which Dignics 09C does, although only momentarily. I would class it as ‘mildly tacky’, which puts it in the same category as something like Victas VS 401, but well below most Chinese ‘sticky’ rubbers. If you’re a looper, that’s actually a good thing, because it’s a lot easier to get heavy topspin with a non-tacky or mildly tacky rubber, compared to a sticky rubber.

Note: The plastic protection sheet that comes attached to the rubber, as pictures above, is actually adhesive. Don’t throw it away because it’s reusable, and you really should keep using it, if you want to keep the rubber tacky!

The sheet I’m testing is Dignics 09C 2.1mm black, which was a sample sheet from Butterfly. Before cutting the sheet, I measured it’s dimensions and weighed the sheet, to determine how heavy it’s likely to be on your bat. Here are the results:

This results in a mass per/cm2 of 0.251, which is slightly heavier than any other in the Dignics or Tenergy family, although still lighter than many others with hard sponges. You can check in the rubber mass database to see how it compares to other rubbers.

Spin on serves is very very good. We need to keep in mind that the amount on spin you get on serves depends a lot on technique, and the perfect technique for tacky rubbers is a little different to that of non-tacky rubbers. For those used to tacky rubbers, you won’t be disappointed with the spin, because it’s massive. The soft and mildly tacky topsheet really allows you to grab the ball, stretching the topsheet and snapping it back out. For those used to non-tacky rubbers like Tenergy, you might require a slight adjustment in contact and timing, but I’m sure the spin you’ll get is still very very high.

The Dignics 09C is not really bouncy, and keeping the ball low and short is easy. Although the mild tack makes it more sensitive to incoming spin, it also helps keep the ball low, and makes it really easy to put heavy spin on the ball with slight brushing action or flick.

Any flicks/flips are really easy to do, as the rubber surface grips the ball so well. I think this is one aspect where it’s superior to Tenergy/Dignics.

Looping performance is often the most important aspect of a rubber for the more experienced players, and this is also what manufacturer ratings are based on. For the euro-type loops (where you dig the ball into the sponge a little), you’ll find this rubber is every bit as spinny as the Tenergy 05, which in my opinion is still the king of Butterfly rubbers when it comes to spin. The throw for this type of loop is medium-high, certainly a little lower compared to Tenergy or Dignics 05.

Looping a backspin ball is easy when you brush loop it, providing massive lift and resulting in a high spin ball. If you’re used to rubbers like Tenergy 05, you’ll find you need to work a little harder to lift the ball, as the trajectory is lower, but the adjustment is not big, so most players would be able to make the adjustment quite easily.

If you brush loop with the rubber (like you do with tacky rubbers), you get something that’s hard to achieve with any of the Tenergy or Dignics series of rubbers, a slow and extremely spinney topspin loop. This is what the softer and slightly tacky topsheet allows you to do, which is certainly important for some players and styles, myself included 🙂

Comparing the trajectory of brush-loops with other tacky rubbers, it was noticeable that the ball dropped down considerably faster after it hit the other side of the table. This is a particularly desirable property when playing players that play away from the table (e.g. choppers), as a fast dropping ball is much harder to handle. This sharp trajectory also illustrates how much spin is on the ball.

Away from the table looping and counter looping does not feel much different from Tenergy 05 or Dignics 05, providing similar speed (possibly a little faster) and high spin balls. The throw/trajectory is not so important at this distance, so little adjustment is required.

Counterlooping is something many find hard to do with tacky rubbers, as the incoming spin is high, which grabs the ball so much, that it’s harder to keep the ball onto the other side of the table. Rubbers like the Tenergy series are great for this, as the throw drops right down, resulting in a low trajectory fast and high spin ball. To counter-loop effectively with the Dignics 09C, you must really engage the harder sponge to drop the trajectory, or there is a higher risk that it will fly over the end of the table. Compared to most tacky rubbers, this stroke is easier with the Dignics 09C, but it’s certainly harder to perform compared to others in the Tenergy/Dignics family.

Certainly at low-to-medium impact, the ball comes off a little slower from the 09C compared to Tenergy or Dignics 05, which can be attributed to the softer and tacky topsheet. At this impact level, the 09C is also a little more sensitive to incoming spin, so some adjustment of the angle of the bat is required.

Choppers usually prefer a hard sponge, with a very grippy (or slightly tacky) topsheet, so it’s not surprising that Dignics 09C chops really well.The ball stays low and you can really load up the spin. The sponge is a little more lively compared to specialized chopper rubbers that traditional choppers like to use, but for modern defenders (those who defend but also play strong attack by opportunity), this rubber provides an excellent option.

The rubber in 1.9mm might be a preferred choice for choppers as it does provide a little bit more control and feel, but if you attack hard you might benefit from choosing 2.1mm.

Does it stay tacky? Yes it does, at least judging by the state after 4 session on different days. The initial tack was just enough to pick up the ball briefly, and I was very happy to find that this tack was the same as it was initially. This is not always the case. Many Chinese rubbers are tacky to start with, and lose most, if not all, of their tack after a few session. To keep the tack, you must (1) clean the rubber regularly, and (2) ALWAYS use the tacky protection sheet when you put it away. If yo fail to do either one of these, the tack will diminish fast.