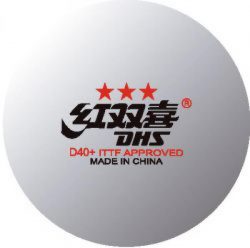 This article summarises the different types of table tennis balls / ping pong balls available on the market in 2018. It compares the different characteristics of each type of ball, including spin, speed, bounce, kick, curve, durability and price, and makes recommendation of the balls that offer good performance at the most affordable price.

What are the best table tennis balls?

The best table tennis balls are 3 star (3*) balls that are ITTF approved. All these balls meet the high standard for international competition. Although there are significant differences in performance between the different types and brands, the choice comes down to cost, durability and personal preference.

What’s the difference between celluloid and plastic balls?

Today there are two types of materials that table tennis balls are made of, plastic and celluloid. Celluloid has been used for the decades, with only a few rare plastic ball ever made (remember the Barna balls?). New Plastic table tennis balls became legal for competition in 2014. Although the old celluloid balls remained legal as well, manufacturers quickly saw the writing on the wall, and started phasing out celluloid balls. As well as a change from celluloid to plastic, the ITTF imposed a requirement (with no apparent player consultation nor a vote!) on the manufacturers that the ITTF approved plastic balls also needed to be a minimum of 40mm, whereas the old tolerance for celluloid was 39.5 to 40.5mm. Typically the celluloid balls measure around 39.6 to 39.7mm, whereas the new plastic balls measure around 40.2mm, so as a result we’ve got balls that are around 0.5mm bigger. This increase in size, as well as the change of material generally means balls are slower and less spinny, and do also bounce and grip differently on the table and have a different trajectory.

What is the difference between seamless and seamed table tennis balls?

Some of you may remember the very first plastic ball that came onto the market in 2012. These bounced quite high, sounded horrible as if they were broken, and really lacked in spin. These balls were seamless, which means they were an almost perfect sphere, whereas seamed balls are 2 halves joined together with a seam, where the joint is visible.

Since feedback regarding these early balls was rather poor, development continued. One manufacturer continued with seamless design, whereas others reverted back to a seamed design that met the new specifications imposed by the ITTF. Gen1 of the seamed balls were made of “Cellulose Acetate”, and these were a lot spinnier than the seamed balls, but lacked in bounce and also durability was rather poor. Since 2017 gen2 balls came onto the market, which were made of “ABS”, which had much improved bounce and durability, although spin was not as high.

The table below summarises the different balls that are currently on the market, with an explanation and summary of each property underneath.

Size: The average size (diameter) of the different types of balls.
Discussion: Since the lower limit of the tolerance has increased to 40.00, the average size of the plastic balls are bigger, which impacts on all it’s characteristics.

Spin: The amount of spin a ball carries and retains over it’s flight path. Comment: There are 3 properties to consider here:

Kick off the table: How much the ball grips and kicks off the table due the spin.
Different surface properties of the balls can create more or less kick on the ball, as the spin bites into the table upon contact. The gen 2 balls appear to get significantly more kick than the other balls, even more than the old celluloid. This effect is more obvious on low speed (and high spin) balls, like spinny serves and sidespin loops (where the forwards speed in different from the direction of the spin).

Durability: How long the ball lasts before it either break or loses it’s initial playing characteristics.
The seamless balls have always been highly durable, comparably (or even better) to the celluloid balls. The gen1 balls proved to be much less durable compared to celluloid, which along with the big price increase, was a big blow to the budget of clubs. The gen2 balls are much more durable and also cheaper, providing much needed relieve to small clubs.

Price: Average cost of balls.
The initial costs of the new plastic balls were considerably higher than celluloid. The gen2 seamed balls are cheaper than both seamless and gen1 seamed balls, and almost back to celluloid prices.

Well there is actually only a handful of table tennis ball manufacturers in the world, so many balls are just re-badged version of others. The manufacturers I’m aware are: Double Happiness / DHS (China), Double Fish (China), Xushaofa (China), Nittaku (Japan), Weener (Germany), Butterfly (Japan).

DHS is by far the biggest, and makes about 70% of all balls, so chances are good that the brand you use is made by DHS. There is only one single manufacturer of seamless balls, so you’re not going to find significant differences between them, although some may be tweaked a little to suit the requirements of a brand. 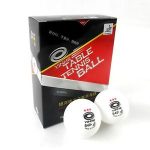 What brand table tennis ball should I buy?

While OOAK shop has carried quite a range of different table tennis balls over the years, we don’t think there is any point in carrying many different brands, because most are made in the same factory, so why pay more for the same or very similar product? Although the brands of balls made outside China are generally good quality, the price is typically 3 to 4 times higher than those made in China, with little difference in performance or durability, so it’s hard to justify using these. So OOAK decided to carry only the best and most cost effective ball of each type, the seamless S40+ from Yinhe and the seamed D40+ from DHS. Both these balls are among the best on the market, and also among the cheapest.

What balls are used in the major table tennis around the world?

The ITTF made this announcement regarding the DHS D40+ table tennis balls:

The 2017 ITTF Challenge Thailand Open to be staged in Bangkok with the preliminary stages scheduled to start on Wednesday 29th March will be played using the current DHS 40+*** ball. The Seamaster 2017 ITTF World Tour Korea Open will witness the first use of the new DHS Plastic Ball.

So obviously the DHS D40+ balls are popular, and the fact that DHS sponsors these events helps too. No doubt other events will use other brands as well, which also often depends on sponsorship deals more than anything else.

What about practice / training balls?

Since practice / training balls don’t require any sort of approval, they is no official system to determine their quality. However, many ball manufacturers make 1 or 2 star table tennis balls, the number of stars indicating the level of quality. If the same manufacturer makes those balls in 3 star and ITTF approved, the 1* and 2* balls are basically the same ball, but marked after sorting. Those that meet the strict quality requirement of ITTF approval are marked as 3*, those that don’t quite meet the weight, size, roundness & veer requirements become 2* or 1*, depending on how close they are. So for just practice balls, or for use in a table tennis robot or ball machine use, this is usually perfectly fine.

If the ball manufacturer does not make 3* ITTF approved balls, and only makes 1* or 2*, or even “no star” balls, there really is no way of knowing how good the balls, so you’d have to look at reviews to get an indication.

Can you buy Orange 3 star ITTF table tennis balls yet?

What about orange 3* plastic balls? As of the time of writing, there are still no orange 3* balls on the ITTF approved list, so they are probably still some time away. It is likely that manufacturers have spent most of their resources in developing better balls and reducing costs, and since the official ball is still white, orange are not a priority. However a few orange training balls (1*) are starting to come into the market, as well as some 3* non-ITTF approved orange ABS balls (pictured right), so it’s likely we’ll have some 3* within a year… that’s my prediction.

Why did we need to change to Plastic balls?

While I personally have no problem with the introduction of plastic balls, I find it completely unacceptable that the ITTF mandated a new tolerance resulting in bigger balls. Similarly I find it unprofessional of the ITTF to mandate the use of the new plastic balls for international events, before the balls were made to a acceptable standard. I’ll leave that for another article :). 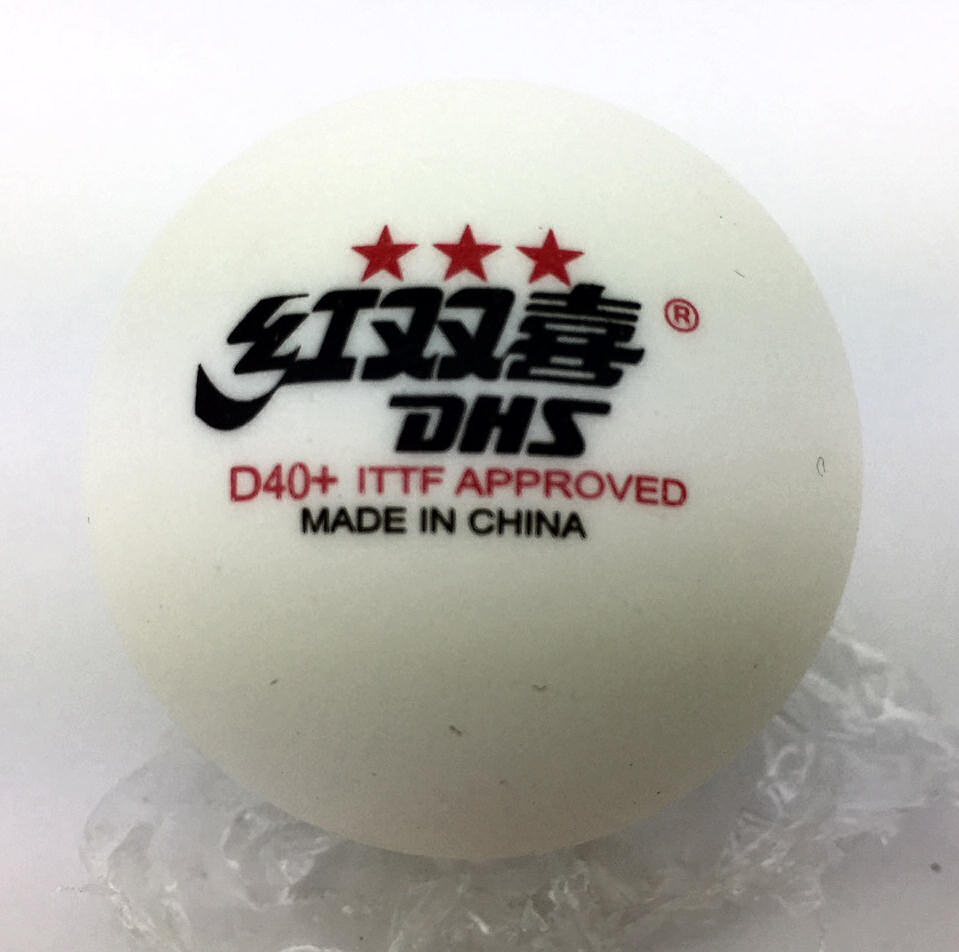 Article Name
The best table tennis balls
Description
Detailed article of the different types of table tennis balls available, the pros and cons of each, and a guide to help you choose the best balls for you. Includes both training balls and 3* competition balls.
Author
haggisv
Publisher Name
OOAK Table Tennis Shop
Publisher Logo