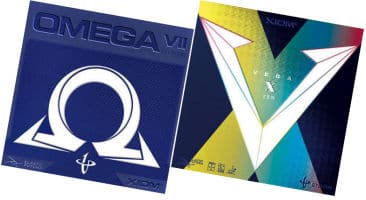 Detailed review of the new rubbers from Xiom for 2020, the Omega 7 Hyper and the Vega X.

On initial inspection, it’s a bit different than the norm. Sure, it’s classic ESN/Xiom in many ways – packaging, great quality, black sponge and so on. But it’s not an obvious variation on any existing ESN rubber I’ve seen before. The sponge is very hard (55 degrees), but is also very small pore. Not solid, but very small pores in comparison with the rest of the Omega 7 line. The topsheet is also a step away from the other Omega 7s, which have a soft, almost wet-look nature. This topsheet looks more along the lines of Rasanter in appearance, but with shorter pips. Not just a very hard variation on Omega 7 Pro then – something much different. No obvious MX-P booster smell. 78g uncut weight – unsurprisingly on the heavy side. 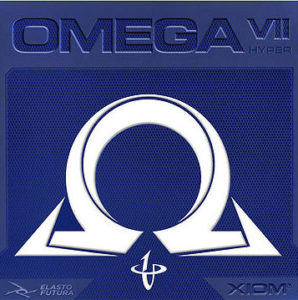 Yes, it’s fast. Very high basic speed. But it’s a clean type of fast – it’s exceptionally linear, as you might expect I suppose. Although the speed is high, the lack of catapult means it gives an incredibly accurate and reliable feeling during basic drives. So there are no unpleasant surprises – the raw speed is just high. Any additional catapult you want to introduce needs to come from the blade selection, and blade selection seems to be key to make this rubber fit your playstyle. On a Viscaria it was an uncompromising railgun of a rubber. On an allround limba blade it became a weapon of milder destruction with a more forgiving nature.

Medium-low on drives, direct, and long due to the raw speed. The topsheet responds very well to brush looping (more on this later), so it seems more medium-high when looping but can be a bit demanding on blade angles and contact points. The low catapult helps in many situations, but it won’t help you when far away from the table so it can be demanding when counter-looping.

Really good when brushing. One of the best non-tacky topsheets I’ve used to be honest. When looping – the rubber sort of urges you to hit either very hard to compress the sponge, or with a very fine contact. The results when you get it right are amazing – the biggest top-end power I’ve ever managed to squeeze out of a rubber that isn’t a highly-boosted H3. But anything less than that and you get a flat drive, so you have to really go at the ball to keep the shot quality up.

The spin on fine contacts and super-linear power delivery also helps a lot with service spin, heavy digs from pushing, and even when chopping. The ball delivery on chops is good in fact – a nasty, sharp low arc with very high spin. It’s not my style of game, but high speed aside this has some definite backspin capabilities.

Very good. Again, the low catapult is a boon here for me. It’s a little spin sensitive – understandable perhaps – but honestly nothing terribly overblown. The only fiddly bit for me was flicking – I think it showed that I rely on some initial bounciness from my rubber during my flicks, and O7H needed more elbow grease to get the ball moving. The margin for error seemed lower here.

Omega 7 Hyper reminded me quite a lot of Tenergy 05 Hard. Very hard, uncompromising sponge. Hyper-linear behaviour. Focused like a laser on doing some things very well – brush looping, powerful direct driving, sharp counters, solid short game. It has a lot of the qualities you expect from a modern chinese rubber, but with a super-grippy topsheet rather than tacky and a lot of power in the sponge. In that respect, perhaps a new take on hybrid rubbers – ESN, but with more of the kind of focus on game style you might expect from a boosted H3 type.

Who would it suit? Probably not the normal two-winged looper who needs more catapult, meaning a T05 or MX-P user. Hyper has a really different approach and feel. So probably an attacking player who currently uses hard-sponged rubber, maybe chinese or a tacky tensor, who may want a the direct play a grippy topsheet offers. A brush looper, or a close-in counter hitting player. I think it would also surprise some modern defenders as well – on a more sedate blade it can still be devastating without being too much of a handful, and it handled chopping surprisingly well. 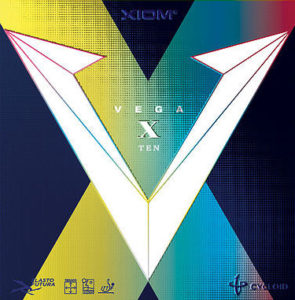 If Omega 7 Hyper looked different to the standard ESN approach, Vega X takes the opposite path. The same usual high quality in general, but more of a typical mid-hard, large-ish pore rubber. The topsheet feels very grippy, and similar in consistency to Hexer Powergrip. A departure from the slightly artificial feel of the original Vega Pro and its stablemates from back in the day (Hexer, Genius etc). No obvious MX-P booster smell. 71g uncut weight.

Although this is an offensive rubber, it feels slightly slower than the big names in the 47.5 degree space. A touch faster than the original Vega Pro (but with a different catapult feel), but a tad slower than MX-P, Aurus Prime, Rasanter R47. The catapult seems mostly noticeable in the middle power range – so not as immediately bouncy as some, but the top-end speed isn’t blazingly fast either. Useful speed, which allows for good looping performance in the middle gears – which is where most two-wing loopers spend their time if we’re honest. The gears do feel very reminiscent of Vega Pro, so users of that should feel right at home.

Vega X shares a really high level of spin with the original Vega Pro. The grippy topsheet and the mid-range catapult combine really well to generate a mid-high arc. The performance in general looping is very strong, and it’s very easy to use when opening up or in a counterlooping rally. It has a feeling of reliable contact with the plastic ball with no signs of slip, and the topsheet isn’t too soft to introduce a feeling of mushiness.

On really hard strokes there is a slight feeling of the rubber maxing out somewhat, but this is a feature of many 47.5 degree rubbers in this class. A slight flattening of the arc, more direct ball delivery.

The downside is the spin sensitivity. In very passive situations, it reacts a lot to incoming spin and demands attention. Playing in a semi-active way is definitely the remedy for this – it’s a rubber which needs a positive approach to shot selection…

…but probably not the optimal choice for a blocker or more passive, control-orientated player. The short game is good in one sense because the low gears aren’t terribly bouncy, and the mid-gear catapult combined with the good grip makes flicks and backhand openers a strength. But when on the back foot, blocking high levels of incoming spin is touchy. There is no free lunch here of course – those mid-effort loops come back to bite when the heat is coming the other way.

Vega X occupies a sweet spot for the average loop-offensive player. Not too fast, not too much early catapult, but lots of spin and easy loop performance. It compares well with its peers – a little faster than Hexer Powergrip, a lot more spinny than Super Ventus, a great mix of qualities. It lacks the power at the very top end of the real big players in this space like MX-P or T05, and is totally different in character to the comparatively brutal Omega 7 Hyper. Where Hyper is hyper-focused, Vega X is hyper-relaxed in most areas excepting spin sensitivity. But it hit several high notes – price/performance/ease-of-use. A goldilocks rubber in almost all respects.