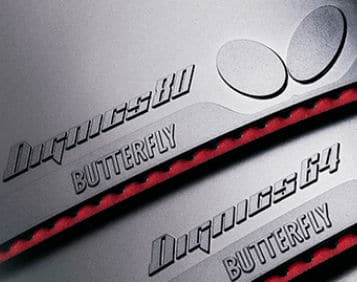 This is a review of the new Butterfly Dignics 80 and 64 rubbers, due to be released in late 2019. Dignics 05 was released earlier this year, and building on the success of this rubber rubber, Butterfly have extended the Dignics range by adding an 80 and 64 version. This review briefly discusses how Dignics differs from the Tenergy series, and covers a detailed review and comparison between the new (and yet unreleased in Sept ’19) Dignics 80 and Dignics 64.

Thanks to David from Butterfly Australia, I’ve been given a pre-release sample of Dignics 80 and Dignics 64, which are reviewed and compared in detail below.

How is Dignics different from the Tenergy series?

For many players, the release of Butterfly Tenergy 05 around 2008, and followed by the Tenergy 64 and 80, was a breakthrough in rubber technology, which explains its popularity at the higher levels of competition table tennis. However over the last 10 years, a lot has changed. Several of the major manufacturer have come up with (arguably) alternative high performance rubbers, for example Tibhar Evolution MX-P, Victas V>15 Extra and the Xiom Omega series. There has also been a significant transition in the change to table tennis balls from celluloid to plastic, which is finally starting to settle down to decent quality balls. The new plastic balls are slower and don’t spin as well, so the manufacturers have tried to enhance their products to try and overcome these shortcomings, with varied success.

Although the Tenergy series is still very popular, Butterfly continued their R&D, and released the Dignics 05 in 2019, which is designed to surpass the properties of the Tenergy series, and overcome the shortcoming of the new plastic balls. Dignics are designed to offer more spin, more speed at the top-end, and better durability.

What are the key differences between Butterfly Dignics 05, 80 and 64?

The designed differences are summarised in the picture below: 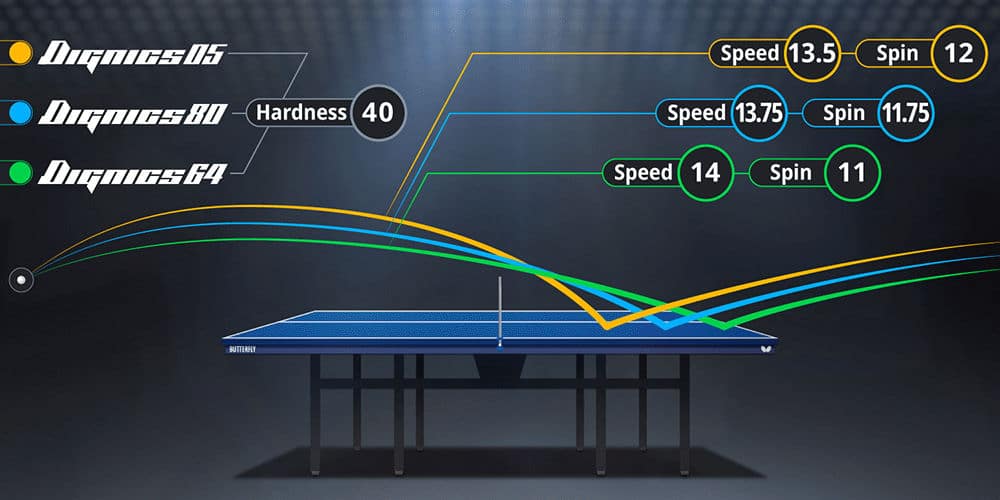 All rubbers in the Dignics series have the new ‘Spring Sponge X’, and the newly-developed top sheet enables racket movement in a more forward direction and imparts more power onto the ball. Dignics 05 enables the “banana-flick” with heavy topspin as well as counter-attacking play close to the table, “80” supports an all-round play at a higher level, while “64” aides the most powerful topspin against topspin play from mid-distance. For those interested in the technical details, the pimple structure varies as follows:

The Dignics sheets are similar weight to the Tenergy series, possibly slightly lighter, which is a little surprising given the sponge is harder. Below are the measurements, which you can use to compare to my rubber sheet mass and size database. 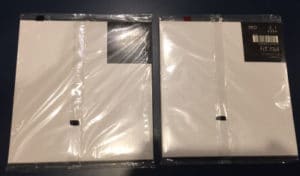 I was given the sample sheets by Butterfly Australia, as pictured right. Butterfly Japan releases these samples in plain packaging, and the rubbers are clearly marked as samples, presumably to ensure that Butterfly dealers only use them for this purpose, and don’t just sell them for profit. 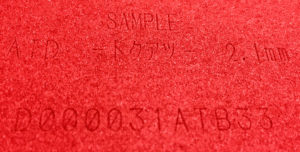 They’ve even gone through the trouble of laser-etching the sample label onto the back of the sponge…the attention to details is quite impressive!

What blade to use for testing?

Rubbers like Tenergy tend to feel nice and work well on composite blades, even though they work very well on many wooden blades as well. For the Butterfly fans, the Timo Boll ALC or Viscaria are the most popular choices, but I didn’t have one of these lying around and didn’t feel like getting a brand new one just for this test, so I looked for something similar. I decided on the new Victas ZX-Gear Out, which is a new Japan-made blade by Victas. Compared to the ALC and Viscaria (which are quite similar), the ZX-Gear Out has a slightly softer feel, is a little stiffer and slighly slower, but I’d put them all in the same category of blades. This blade is similar to the Victas ZX-Gear In, which is the blade used by Liam Pitchford and several other professional players, so it’s all top quality gear.

Here are some pictured of the ‘glued up’ bat (note the colours look a little washed out on the third picture, the red on the first picture looks more realistic. 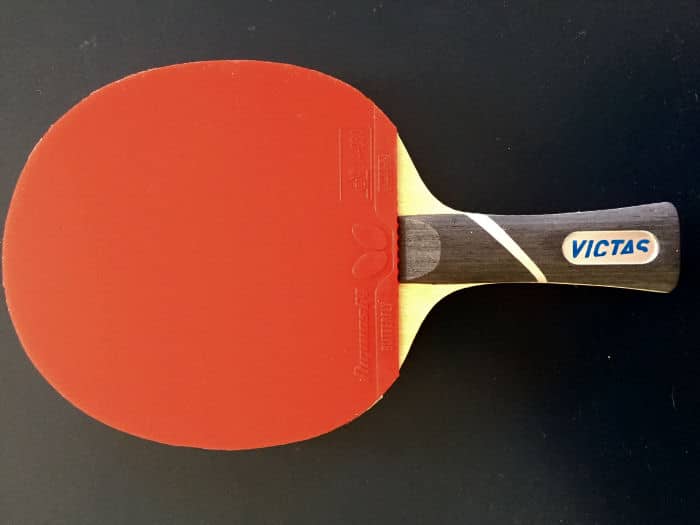 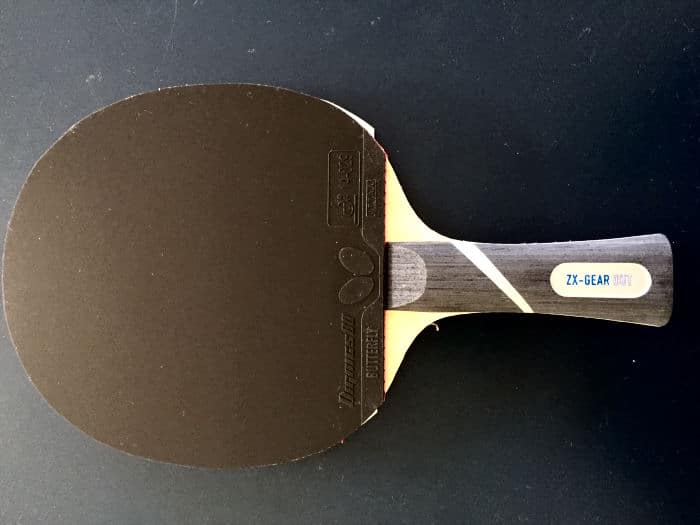 Review of Dignics 80 and Dignics 64

As with Dignics 05, the topsheet of the Dignics 80 and 64 have more of a shine to it compared to the Tenergy series. This (presumably) smoother finish provides the rubber with higher grip to the ball, making it easier to generate high spin on fine brushes. The Dignics topsheet also feels a little softer, which also helps grip the ball on soft contact.
For current Tenergy users, I’m not sure if the Dignics will give you more spin, as you’re already used to digging the ball into the rubber, the spin will likely to be the same. But for those that are used to tacky rubbers, you’ll likely get more spin out of the Dignics.
In summary, both the Dignics 80 and 64 offers plenty of spin potential, similar to Tenergy, or for some players possibly more.

For blocking against loops, these rubbers are a dream. For passive blocking, it felt like all I had to do was get my bat there, and it would go on. For more aggressive blocking, the power of the rubber really kicked in, producing fast and penetrating balls. There was not a lot of difference between the Dignics 80 and 64, the minor difference was that the ball came off a little lower and faster from the Dignics 64.
Although I’ve not tried Tenergy on this same blade, I’m quite convinced blocking is easier with the Dignics compared to Tenergy.

We started with the usual ‘warm up’ counter hitting. Although the Dignics has a firmer sponge, it really does not feel any harder compared to the equivalent Tenergy part. Both rubbers felt lively, nice glue feel, and quite easy to play with, not too dissimilar to a fresh sheet of Tenergy. Both sheets gripped the ball really well. The difference in speed between the two sheets becomes more obvious the more aggressive you hit, the Dignics 64 clearly feels faster.

The Dignics rubbers really shined in looping, providing very high grip, and producing fast and spinney loops. On the slower ‘brush’ loops you could rally feel the ball hanging onto the bat before it catapulted out. This gave the feeling of great control, and it felt easier compared to Tenergy, which has a lower dwell time. For this type of stroke, the Dignics felt slower, spinnier and with higher control compared to the equivalent Tenergy model. These brush loops were clearly easier to do with the Dignics 80 compared to the 64, and I suspect the Dignics 05 might be even better for this.

Once you hit through the ball more, you can really feel the dynamic sponge kicking in, producing a much faster and still very spinny loop with a great curve to bring the ball onto the table. Faster hand speed produced more and more power and spin, something that Tenergy is also especially good at. The Dignics 64 was a little too lively for me in-close, but taking a step back made it a lot easier to handle, and a very powerful looping weapon. Although I have not tried Tenergy on the same blade, I suspect Dignics has higher top speed for looping, as the effect of the more power (and firmer) sponge kicks in.

Loop kills (a fast counter loop against a topspin ball) with these rubbers were truly impressive, producing a very fast ball that dipped fast after it hit the table, making it very hard to block. This type of shot can be difficult to perform with a rubber that really grips the ball, as the high incoming spin can react too much with the rubber, causing over-hitting. The Dignics, in particular the 64, was fantastic for this, producing a lower trajectory on high impact, to counter the incoming spin. Very impressive.

Active flicks/flips over the table, which are so common at the elite levels, work really well for the Dignics! The extra high grip on the surface really helps to grab the ball and spin it, which is especially important with the new plastic balls. It was clear that the Dignics 80 was better at this compared to the 64, but I could do it with both very effectively, and I suspect it’s even easier with the Dignics 05.

Pushing the ball short with spin is very effective, although I missed the ‘dead feel’ of the Tenergy 05 and 80 on soft contact, which made short returns even easier. The Dignics just has a more lively feel, forcing you to play more of a brush to keep the ball low and short. Of course there are many rubbers that have a similar property, the Tibhar MX-P comes to mind, so it’s not really a weakness of rubber, it just requires some adjustment if changing from Tenergy. The property encourages you to play a flick/flip instead, where the Dignics really excels.

Well it’s obviously too early to say if Butterfly’s claim, that the rubber is more durable than Tenergy, is true. However we do have a few Dignics 05 users in the club, who claim that after about a month of use, when Tenergy would show sign of wear (like the pimples underneath the surface showing), Dignics still looks the same with little signs of wear. Since the topsheet material for all three Dignics is the same (only the pimple structure is different), I can’t see why the same would not be true for the Dignics 80 and 64. Although I’m no fan of the higher price tag, higher durability would at least go some way towards justifying this.

I’ve tried the Dignics rubber on other blades now, and although it does perform well on every blade I tried, it excels on the stiffer and harder blades, where it feels more crisp and lively. On the Victas Gear blades the Dignics feels really nice, and I would expect similar performance from Butterfly blades like the Viscaria, Timo Boll ALC, etc. 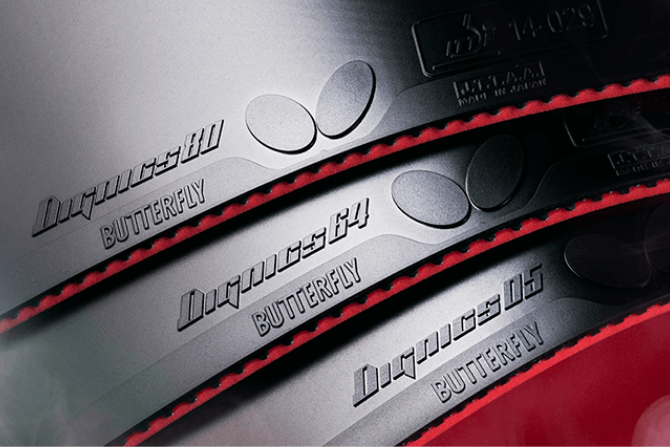