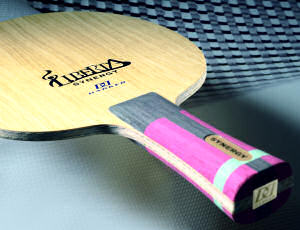 What table tennis bats do professionals use? Are the bats purchased in sports stores anything like it? Where can I buy a bat actually used by professionals? Will this make me a better player? If you want any of these questions answered, this article is for you.

What you see at most Sports Stores

If you Google for professional table tennis bats, no doubt you’ll find tons of suggestions of sites that sell bats, with packaging that displays pictures of top players (see below) in the world used to promote entire ranges of bats, from a variety of brands. Shops promote themselves as the experts that carries the biggest range of these bats. Truth is that the professional use NOTHING like this. These ‘premade bat’ (meaning they’re assembled at the factory), are very basic and far inferior in both performance and price.  Using top players to promote these bats is pure marketing, and borderline deceptive in my opinion!

So what type of bats are there, and what do professional use? well there are basically 2 types of table tennis bats, pre-made bats and custom bats, and professional bats are a subset of the custom bat range. Each will be discussed below in some detail. 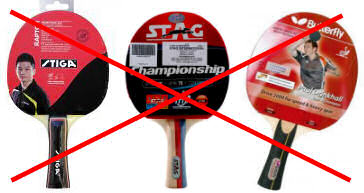 These bats range from the cheapest rubbish that you buy from a supermarket, to the half-decent ones that you buy from the sports stores. As you may have read in our cheapest table tennis bat article, these bats are really only suitable for beginners or recreational players, and absolutely nothing like a professional bat. They are mass produced, have star ratings or with big numbers displayed on the packaging (like 5* performance, or something like Waldner 9000), but don’t be deceived, it’s all marketing, and no serious club player (let alone professionals!) would touch them!

OOAK does carry a small range of these bats in the shop, but we would never recommend them for the more serious players, only for beginners and for those on a tight budget.

Custom bats is what OOAK Shop specialises in, and this what most clubs players use, and of course the highest quality custom bats are the ones used by the professional players. For a custom bat, you select the blade that suits you style, within a budget you can afford. Then you customise further and choose a rubber for both forehand and backhand (many players use the same on both sides). Apart from the high quality, a custom bat can often work out cheaper than a pre-made bat, especially considering that the rubbers are replaceable on the custom bat, while usually they’re not for pre-mades.

Professional table tennis players only use custom table tennis bats. The choice of blade depends on many factors, the main ones being that it offers enough speed for the player, and offers enough feel and control. The rubbers are chosen for both backhand and forehand, and it’s quite common to have different rubbers on either side, to match the style they play on forehand or backhand. 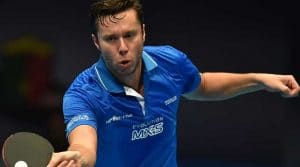 The choice of rubber and blade will give the assembled bat a certain ‘feel’ of the ball, which is optimised for each players, as the ‘feel’ requirement is different for each individual. It’s well known that certain types of blades combine well with others though, so this is usually a good starting point.

Since the professional bats are always high quality, they tend to be on the more expensive side. However you don’t need to spend $500 to get a professional bat. Look for example at Vladimir Samsonov’s bat, which comes in below $200. The main reason for this is that he’s not using Butterfly equipment.

While I have nothing against Butterfly (in fact we’re a butterfly distributor!) and they make some very good products, but they have set a new benchmark for higher pricing of table tennis products…prices that were unheard off only a about 10 years ago when this all started. I guess that’s how they can afford to sponsor all those top players.

An example of a popular Butterfly professional bat is that of Germany’s Timo Boll, who is at the time of writing World #1. The Timo Boll table tennis bat comprises of a Timo Boll ALC arylate carbon blade, plus two Tenergy 05 rubbers. At a little over $400 is does work out a little expensive for some people, but it is without a doubt a top quality combination that also works very well for many high level club players.

For professionals the sponge thickness of the rubbers is commonly maximum thickness, as this gives them the greatest power and spin at high speed. Thinner sponge can give them more control in some part of the game (like the short game), but these players put in so many practice hours, they can compensate for the lower control, and can take full advantage of the thicker sponge. However for us mere mortals, a little more control would not go astray, so it’s worth considering getting the same bat with slightly thinner sponges to give that extra control.

Since OOAK Shop carries almost all the top table tennis brands, we can make up the majority of professional players bats. Since we often get enquiries about what some of the top players use, we’ve decided to create a dedicated section, where we list the equipment of each player. In the descriptions you’ll find pictures and details of the player and equipment, and also a video of the player in action, so that you can confirm the type of bat suits the style you want to play. We offer no guarantees that you’ll play like the professional once you get the bat though, hah hah.

You can see the (growing) list of professional table tennis bats here.

Note: Professional players do change equipment over time, due to new sponsorship agreements, or they’ve changed their style or are just looking for something better. The equipment listed in the professional bat section is correct to the best of our knowledge, but we can’t be sure they’re still using the same equipment.

At OOAK Shop we have decades of experience in assembling bats, so we can do a professional job like no other. We include matching edge tape for a complete and neat finish.

Why aren’t some of the top Chinese player bats listed in OOAK Shop?

The reason for this is that many of the top Chinese players use DHS Hurricane rubbers, and unfortunately the ones you can buy on the market, are quite different to the ones used by the top professionals. DHS Hurricane 3 is the commonly used among the selection of Chinese rubbers, and although the version you can buy commercially is quite a decent rubber, the professional Hurricane 3 is supposedly a ‘select’ version that’s boosted to suit the specific requirements of the players. Although boosting rubbers by players is not legal according to the ITTF Rules of table tennis, it’s perfectly legal if it’s done by the factory that makes these rubbers, which is what’s supposedly done for the Chinese Elite players. DHS does not release these versions of the rubber to the public, but does use the name to promote their commercial version to the public.

So we don’t feel it’s right to list a bat that’s used by a professional, if the performance is significantly different to that used by the actual player. This is why we don’t list the bats of these players.