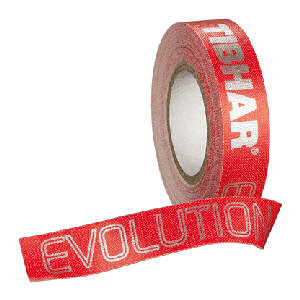 Some players use edge tape on their table tennis bats, some don’t. Do you really need edge tape? Is it purely cosmetic, or are there functional reasons for edge tape? Are there different types of edge tape? This article covers all these questions, so that you can decide what to use for your bat.

Table tennis Edge Tape, also called ‘side tape’, is used to cover the edge of a table tennis bat. Narrow edge tape covers only the wooden part of the bat, wider ones cover the wood + the edge of the rubber. Although there is no mandatory reason to use edge tape, many players use it to give their bat a neat finish, or to give their bat that extra ‘wow’ factor. Some players also use edge tape to protect the edge of the bat, and for this, it’s important to select the correct one.

Are all types of edge tape legal?

There are no specific table tennis rules that prohibit any kind of edge tape. However there may be some unusual cases where an umpire/referee might object, such as;

So basically you can use anything, just be reasonable and consider the issues above. 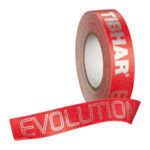 The most common types of edge tape

The most common type of edge tape is a cloth-like material with a strong adhesive back, like the Tibhar Evolution tape pictured right. Almost all the major manufacturers make this tape in 12mm width, which is usually enough to cover the edge of the blade, plus the edge of two inverted rubbers. Only a few manufacturers make this in a wider range of widths, like Donic who make it in 6,9,12 and 15mm, which is important if you have a bat with an less common width, like the thick balsa blade, or a thin blade with two pimple rubbers on either side.

The so-called “foam edge tape” are specifically designed to absorb accidental hits on your bat edge. They are made of a soft layer of foam, usually 1 to 1mm thick, with an adhesive backing. The first ones that came out were made by Dr Neubauer (pictured right), because they have a lot of balsa blades, which are much more prone to damage from accidental hits. Joola and a few others now make them as well.

Tip: Because these types of tape are more rigid, they don’t adhere to the surface as well as cloth-type tapes. Stick a cloth-type edge tape on first, which smooths out of the surface, then stick your foam tape on top. This also makes the foam tape easier to remove, if you want to reuse it (assuming it’s not completely destroyed from hitting the table!). See below a thick balsa bat I made up, with cloth-type tape first, and a foam type tape over the top; 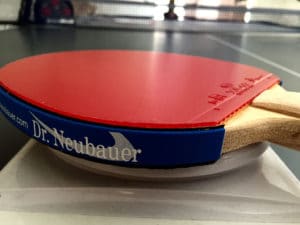 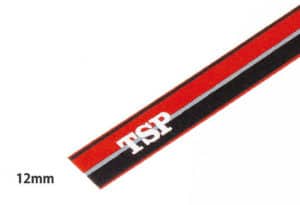 Other types of edge tape

There are a few other types of edge tape, which offer more protection to the bat edge than the cloth tape, but are more firm compared to the foam tape. My favourite is one made by TSP as pictured right, called the TSP Feather Side tape which is made of a type of ‘felt’ cloth and is flexible and much thicker than ordinary edge tape, and can therefore offer more protection against accidental damage to your bat. Bright red & black colours with white writing and a silver line gives the tape high contrast, and your bat a real classy look.

The adhesive strength is not as high as that of cloth edge tape, because it’s designed for removal and reuse. Putting a cloth tape underneath is usually a good idea.

Which is the most common width and lengths?

The 10mm and 12mm are the most common width, some manufacturers only make a single width, which would be either 10mm or 12mm. A blade is typically 6mm in width. The great majority of players use two inverted rubbers with sponge thickness between 1.5mm to 2.3mm. Assuming a typical inverted top-sheet is about 1.7mm, a single rubber would add between 3.2mm to 4mm, so two rubbers add between 6.4mm to 8mm. So the typical bat thickness would be around 12mm to 14mm. This is why most players would use a 12mm edge tape, as this covers most of the edge of the majority of bats.

To cover the full length of your bat, you need less than 50cm, so that’s why separately-sold edge tape are usually between 45 to 50cm. Roll are typically sold in lengths of 5m, 10m or 50m, which should give you enough to tape do 10,20 or 100 bats respectively.

Will my shop put edge tape on my bat when they assemble it?

While I can’t speak for all shops, but OOAK table tennis shop does include free edge tape when we assemble bats. We buy our tapes in 50m rolls to make it cost effective, and stock the standard 12mm wide tape for most of the major brands, and other widths for a selected number of brands.
Unless you tell us otherwise, we usually pick the tape that matches the brand of blade and/or rubbers. Unfortunately not all brands make 50m rolls, nor do all of them make them in the required width. Our standard way to pick the appropriate edge tape is:

Of course if you choose a foam edge tape it needs to be purchased separately. We would still put a standard tape on the bat before we apply the foam tape, because the foam tapes stick much better on the smooth surface of a regular edge tape.

Don’t stretch the tape too much while putting it on. You’ll find that tension can pull the tape off over time, and adhesive strength to make it stick back is reduced. If you use a width that’s more than the blade + rubber thickness, the tape will protrude beyond the edge of your bat. Some people use this and fold it over onto the rubber surface, which does help to protect the edges from crumbling, but note that it’s technically illegal for formal competition or tournaments.